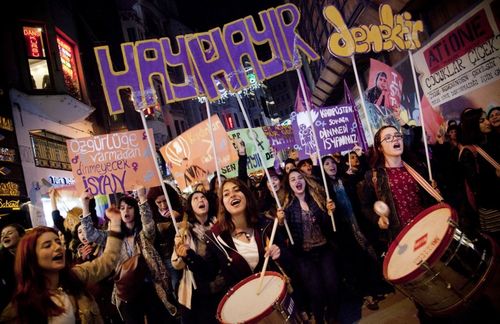 WARNING: This report concerns an incident of violence. Although he does not share the details, he does relate what happened. Content can trigger memories or have a traumatic effect on people who have previously witnessed or subjected to violence, discrimination and hatred. In this case, you can contact a mental health specialist, an LGBTI + organization in your city or write to May 17 Association for support.

In Istanbul’s ÅžiÅŸli, Harun SarÄ±kaya threatened transgender woman Asel Oktay with a gun and sexually assaulted her on March 2. Running away from her home, Oktay called the police and the assailant was arrested.

SarÄ±kaya was released despite the request for protection and injunction. A criminal case has been filed against SarÄ±kaya for sexual assault, threat and insult. The prosecutor presented his opinion on the charges at the third hearing yesterday (September 13).

At the hearing held by the 8th Istanbul Criminal Court, the prosecutor requested the acquittal of SarÄ±kaya for sexual assault, threat and insult. The prosecutor demanded his sanction on the grounds that the weapon he used to threaten Oktay was not registered.

The next hearing will take place on October 11.

As reported by YÄ±ldÄ±z Tar from Kaos GL, although the prosecutor requested the acquittal due to “lack of evidence”, the report released by the forensic medicine department of Istanbul University medical faculty has documented that Asel Oktay suffers from post-traumatic stress disorder, she experiences the moment of attack once again and even finds it difficult to enter her room.

The forensic report stresses that the absence of a physical finding is not in itself sufficient to rule out sexual assault.

The lawyer objected to the prosecutor’s opinion

Asel Oktay’s lawyer, Levent PiÅŸkin, said that according to the case law of the Court of Cassation, an opinion on the charges cannot be given without a psychological assessment. He petitioned the court and asked for a new opinion. PiÅŸkin reminded the court that the forensic report should be taken into account in the opinion.

The accused’s statements are contradictory

Prosecutor Harun SarÄ±kaya made contradictory statements to the police department, the prosecutor’s office and the judiciary.

Police also said the accused cursed and threatened them during talks with the prosecutor. Saying a different thing each time he spoke about how he had met Asel Oktay, SarÄ±kaya also had a knife and 11 bullets on him in addition to the weapon.

He also made some remarks frequently encountered in hate crimes, saying, “I thought it was a woman, she turned out to be a travesty.” (EMK / SD)