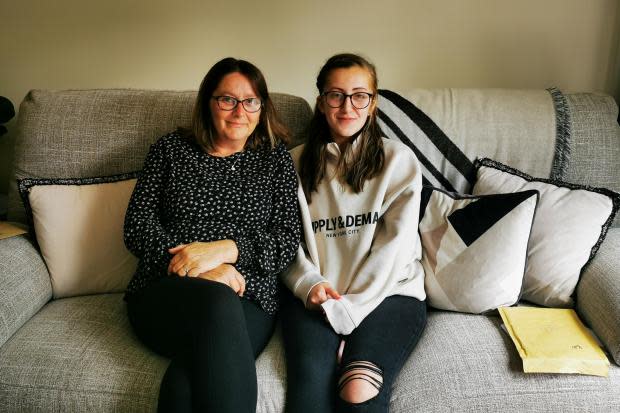 A teenager from Swindon has described how her life changed after being diagnosed with the illness.

Hope Broadbank, who lives in Park South, was diagnosed with a functional neurological disorder (FND) in June 2021.

FND is a medical condition that causes problems with how the nervous system works and how the brain and body send and/or receive signals.

This can lead to the body seizing several times.

As a result, Ms Broadbank cannot do basic things like going to the toilet without the support of her family.

Hope got in touch with the Adver because she wanted to tell people about the condition.

One day in 2019, Hope noticed her feet were blue after work and she had pins and needles.

The sensation traveled up her legs and then back up to her arms.

She experienced chest pains and an ECG was administered, GPs suggested it was viral.

Chest pains increased and an ambulance was dispatched.

Hope was taken to hospital and an x-ray was given which was clear.

She was then discharged and told to see the GP if things got worse.

Pins and needles then began to go around her body and eventually she was forced to crawl down the stairs.

She eventually collapsed and lost feeling on the left side of her body.

Blood tests and antibody tests were done and an MRI was done, but they found nothing.

While in the hospital, Hope deteriorated quite quickly, she couldn’t use her arms or legs, and she needed a frame and other people to support her.

Sue and her husband had to support her just to go to the bathroom.

Within a week of being home, Hope completely lost the use and feeling of her legs and she began having tremors and seizures.

Occupational therapy was then called and they were shocked that Hope was released and left in her condition with no support or care plan.

The seizures then became more violent and frequent, she then lost feeling in her bladder.

Mother Sue said: ‘As a parent I was exasperated to be left in limbo.

“She had to completely learn to walk and stand because the messages from the brain to the body are interrupted and the body doesn’t know how to do the natural movements.”

After numerous appointments and consultations, Hope was finally diagnosed with FND in June 2021.

Hope said: “It’s life changing for everyone, I had FND at a tough age because my friends are still going out, doing what teenagers should be doing.

“I had almost finished my apprenticeship but it’s over, I can’t drive anymore.

“With FND I can do things and then I have bad days where I can’t get out of bed because I’m so tired.

“That’s the one thing people don’t know about FND, every day is completely different, you can’t plan ahead.”

Sue, added: “Our whole family has had to adapt to the crises.

“Hope can’t go out unsupervised, she has to have someone with her in case she has a seizure.

“They are very physical and debilitating, she couldn’t go to a nightclub because of the sound.

“She can’t do the normal things a 19-year-old would want to do.”

“Anxiety and panic attacks are part of the condition, it’s debilitating.”